L’Opera Broadcast Video was born 35 years ago in Foggia, focused on mobile TV services. Its latest truck, the UHD-HDR OB7, takes to the road this month delivering up to 61 square metres of working space at full extension and accommodating a team of 35. The truck comprises seven production suites, with the only shared facility being the camera control room, from which up to 28 cameras can be controlled.

Michele Infante, L’Opera chief executive officer, owner and founding partner, proudly claims to be the eldest service in Italy. “In all these years we have moved from the first mobile SD TV gallery, progressing through all the technological steps of the market and today we are configured as owners of three important mobile HD vehicles,” he told SVG Europe.

“In time we then dealt with the involvement of Mediaset in motor racing which allowed us to develop a great competence in the sector and to structure ourselves in today’s shape.

“From the purchase of the necessary buildings and mobile vehicles, today we exist thanks to stable customers and we configure ourselves as specialised in outdoor shooting with mobile broadcast vehicles and with orientation towards sports competitions.

“The core business of the company is motor racing where we produce two European and one Italian championship, AC Sport. The three historical HD mobile vehicles are also accompanied by a moving satellite uplink, in addition to the great step just realised that provides a 4K UHD HDR truck due to launch shortly.

“Among the most interesting commitments we need mention is the Italian Rally that will see us engaged next year and a contract with a Spanish company that allows us to follow the European championship in eight countries, as well as a further commitment with a Swiss company that covers six other European stages,” he said.

Three vehicles and the new OB7

The mobile vehicles which L’Opera owns were designed internally and then created by specialised companies, as in the case of the new OB7, the seventh created, commissioned to Video Progetti.

They were among the first in Italy — about ten years ago — to create the double expansion on a vehicle, as on OB5, in which two completely expandable right and left walls creates a lot of space, to the point of having the feeling of operating on a truck while being on a smaller vehicle.

“In practice, this new vehicle becomes the representation of the Italian reality that moves towards 4K and that requires the possibility of performing two operations together: the shooting as host broadcaster and at the same time an integration — ie it can easily perform two parallel services, but totally independent.”

The RVM section and the EVS XT-VIA are on the longest wall, then there are two audio mixer galleries equipped with Calrec Summa digital audio consoles and Dolby E encoders. On board we find a Clearcom Eclipse HX intercom system.

The new OB7 is a 14-metre truck, completed at the end of August by the 480-horsepower tractor that pulls it, ready to work with 28 cameras in 4K UHD HDR, plus Sony cameras and Canon lenses including 101x.

The enormous total working area is of 61 square metres, with two entrances plus a separate one for the engineering area, divided by a movable sliding wall and relative door that allows for a single giant area or two dedicated ones.

Michele Infante told SVG Europe: “To tell you the truth, initially we had thought of two separate vehicles that could be combined on demand; this in order to face even minor events in 4K and not only the big matches, adjusting the commitment of resources. However, customers highlighted the need to also have an integration on board the vehicle to optimise the economic commitment.

“Therefore, after a first layout and subsequent presentation to customers who have made very precise requests for the division of the areas and access zones, the spaces have been designed in a manner congenial to the requests and entrusted with the task of Video Progetti. Today there are only a couple of similar vehicles in Italy.” 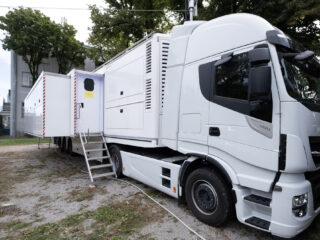